Delivering RFID in the Cloud

In recent years, the maturing of RFID and Cloud computing have followed a similar trajectory from niche specialism to mainstream business tools.  Their convergence forms a key part of the emerging concept of “The Internet of Things” where network enabled, geo-located objects and sensors provide the input for an array of imaginative software solutions touching all aspects of our lives.

Using web based software to track and trace RFID enabled objects around the world is an extremely powerful concept and it is one that we have sought to deliver to our customers.   Waer Systems has a long history of solving complex business problems through our Cloud based software.  Waer’s RFID architecture is a modular system that is designed to complement our core offering and it can also be deployed independently and interfaced directly to other systems.  How this is achieved, is down to the cloud based architecture of Waer’s solution.

When we designed our RFID module, we wanted to make sure that it fitted into our existing cloud architecture.  This would provide a number of key benefits for our customers:

Our approach to the architecture was therefore driven by ensuring that it was cloud based, open and extendable.

To implement our cloud based architecture we broke it down into discreet elements that would exist independently of one another:

Two key considerations for exposing these elements in the cloud are security and availability.  We took steps to secure the hardware and software to make sure that information was only available to registered users within our software.  To ensure availability we have implemented monitoring software and built in redundancy and failover to the hardware platforms. 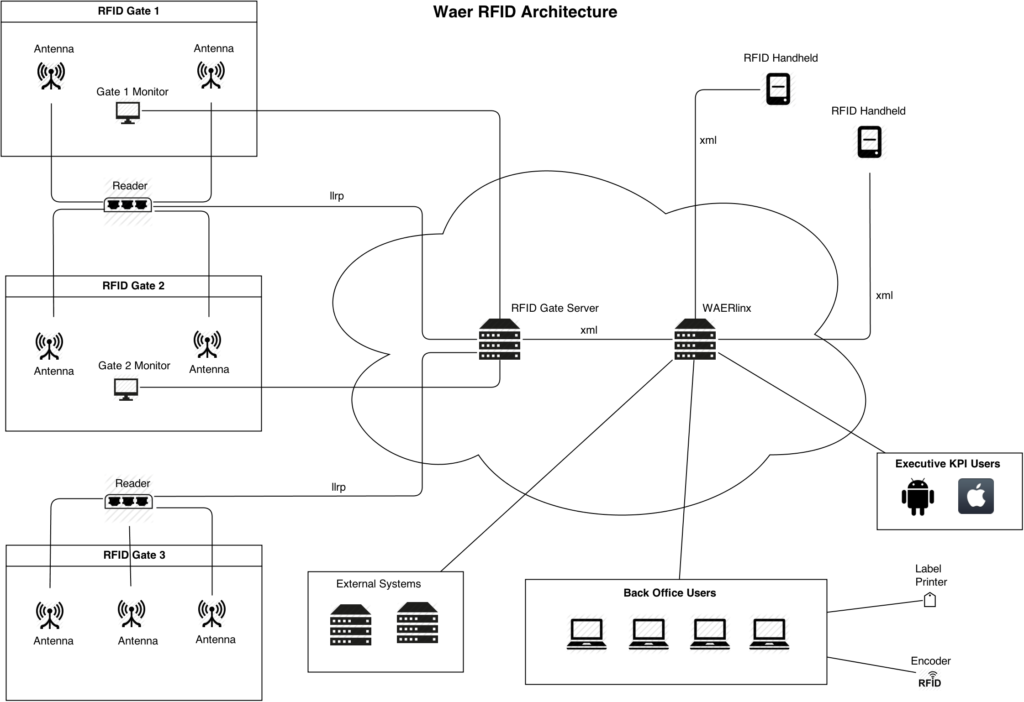 This standard is controlled by GS1 and embodies a number of different encoding standards depending on the nature of the items being tracked.  For part number/service identification, for example there is the Global Trade Identification Number (GTIN) and for asset life-cycle tracking there is the Global Individual Asset Identifier (GIAI).

We therefore adopted this standard and based our tag and RFID hardware selection decisions on it.  A key feature of the standard is that it is specific to UHF technology.  UHF is the default choice when choosing RFID technology because of its long read range and as a result the choice of tags and hardware that support it is extensive.

RFID Gates are made up of one or more antennas attached to an RFID reader.   RFID readers generally have 2 or more antenna ports.  As an RFID tag passes through the antenna field, it is picked up and read by the reader.  The reader can be configured for the environment in which it is working, the tag frequency for example or the read-range can all be set with the reader.  It also handles some low level issues such as read collision.

The reader will capture the scans but in order to be of use in a cloud environment, they need to be made available over the internet.  To enable this we use the Low Level Reader Protocol (LLRP).   This protocol is designed to provide a common network interface to RFID devices and as such it is ideally suited implementing cloud based solutions.  As long as the reader can be reached over the network then its captured reads can be interrogated by application software which, in the case of the Waer solution, is the RFID Gate Server.

The RFID Gate Server is a cloud based Web application which allows the operators to use and maintain the RFID gates.  A single gate server controls all the gates in the network.  Users can log into the Gate Server application at a given location and use it to interact with an RFID gate.  If the gate is an operator driven gate, the operator can review the captured scans and then process them.

System administrators can use the gate server to create new gates and maintain existing ones.  We provide several different options for how gates can be set up:

To make the architecture extendable we chose to separate the RFID Gate Server from core WAERlinx and deliver it as a separate autonomous module.  This would give us the option to integrate it with other applications without needing to use our core engine.  We therefore used XML over HTTP as a standard interface mechanism for the Gate Server and built a web service in core WaerLinx to interface to it.

Handheld RFID readers are necessary where the container is too large or heavy to go through the RFID gate or the environment is not suitable for a fixed gate.  This might be the case if the site in question belongs to a 3rd party that is unwilling to install a fixed gate.  A further feature of these devices is that they can be GPRS enabled so that they can be used in areas with limited access to standard wired and wireless networks.  We designed the software running on these devices to operate in store/forward mode so if there is no access to any network at a specific location, for example a difficult environment such as one might find in mining, they can still be used to perform operations and then the scans can be transmitted later once the device is back in range of a network.  They are also the preferred option when it comes to taking an RFID based stock count.

Once the scans are captured in WAERlinx, all the power of our core product can be brought to bear on the management of the supply chain.  As this application is delivered over the internet using the web browser, it completes the cloud solution for the RFID platform.

All of the functionality to support the movement of items and the stock-count process is found in core WaerLinx.  XML requests are received from the Gate Server and Handheld scanners; they are processed and the system returns a response back to the calling device.  This is where the more complex features like service management and alert handling are brought into play.   The bulk of system maintenance is handled within the core product.  Users can import new items into the application and create new sites and locations to move them into.

Using WAERconsole, operators can run detailed reports and enquiries on the supply chain that they are supporting.  They can run a wide range or reports including the inventory position and transaction history against the various items.  These reports can be displayed graphically as KPIs and are available on a range of devices including tablet and smart-phones.

WAERflow is our integration platform which enables information sharing between systems.  This component can be used to interface data between partner systems to further extend the reach of the system.

A successful implementation of RFID in the Cloud needs some key ingredients:

This site uses cookies to enhance the online experience of our visitors and to better understand how our website is used. By continuing to browse the site you are agreeing to our use of cookies. Find out more.